A little bit of history.

This is CD is a result of my search for a suitable ‘soundtrack’ to sitting meditative and altered state practices. Prior to this CD I have produced a recording which used deep voice sampled chants. I used it for my own sittings and it was never released.

However a copy was given to Swami Dharmananda Saraswati and I know that she loved it and played it during various workshops and retreats.

As powerful as that recording was, I felt that the overall sound was too strong for longer meditation sittings. There was a ‘sound’ in my head that I was after but could never get. A gentler sound that would be more suited to long periods of unattended sitting practices. I was also spurred into action by Swamiji to get that original recording released for everyone.

A special occasion arouse during a retreat one year, where I had my recording equipment set up for the purpose of recording Swamiji’s talks. During one particular meditation sitting, we chanted the OM mantra, like we always did,  and that chant was the sound I was after. It was immersed in ‘light’, so to speak. It was beautiful and powerful. It is the sound you hear on the ‘Be Still’ CD.

Even though, the chant sounds just perfect on its own, I felt that it needed music as well.

Perhaps ‘needed’ is the wrong word. The music just naturally ‘arrived’ at my fingertips as if to be joined in that harmonious OM chorus... Perhaps melodies don’t want to travel alone, and need the company of the human voice... So the end result is not just the chant. There are sounds and melodies which hopefully act in the spirit they were designed and intended, aiding and quickening the meditative state.

This CD holds a special place in my heart. It’s from a very special time in my life of intense meditative practice and study. I sincerely wish and hope that its sound will inspire you to a greater stillness and peace. Rafael Szaban 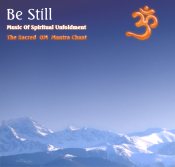